A small school in mid-Missouri is making a big investment in eSports. These are the stories of that team.

To read the story, complete the mission. Scroll down to continue.
Touch the next picture to complete a mission.

Try to kill the enemy to continue “When I tell people that I play video games for school, they don't believe me. I told my cousin, (and) he called my mom afterward and asked, ‘Was he lying to me?’ Because it sounds so unreal. … Yeah, it's real. It's hard to believe. But, yes, it's real.” - Anthony Inizuza

In the world of the video game Rocket League, Anthony Inizuza is better known as Pain, named after a beloved character from the anime series “Naruto.”

Here, Inizuza pilots a rocket-boosted car to push a ball twice its size into the opponent’s net. The ball hardly touches the ground throughout the match, requiring precise finger movements of less than a centimeter to line up a shot.

Over the last two years, the 24-year-old Inizuza has logged over 2,500 hours playing the popular video game. By honing his skills, Inizuza has become one of the top 500 Rocket League players out of 50 million players around the world.

“I like to compete; I like to win,” Inzuza said. “When someone's better than me, I want to beat them. I want to get good enough to where I can.”

But now it’s more than just fun and games. Inizuza’s prowess in gaming has earned him a spot on the eSports team at Missouri Valley College, a private liberal arts college in Marshall. It’s still a very surreal yet exciting opportunity for Inizuza. 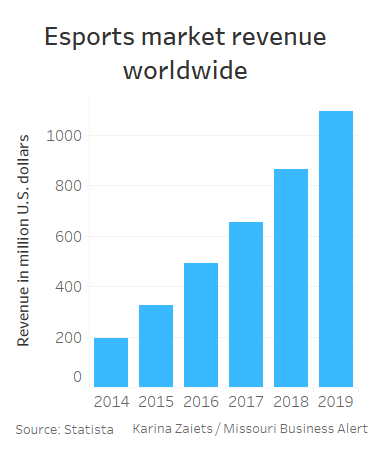 Inizuza began playing Rocket League while studying at Kansas City Kansas Community College. Back then, he had to work two jobs to help pay for his education. Still, he got so involved with the game that he’d spend up to 40 hours a week practicing during summer break.

While at community college, Inizuza and two of his friends formed a team to enter the Collegiate Rocket League National Championship with the hopes of splitting the $50,000 scholarship prize.

He didn’t accomplish that goal. But this spring, Inizuza earned even more to play for Missouri Valley’s fledgling eSports program.

Inizuza is not alone. By summer, Missouri Valley’s team had grown to 20 members. Nineteen of the team members, including Inizuza, receive $15,000 in tuition awards each year. Nationally, the average eSports scholarship student receives $4,800, according to the National Association of Collegiate Esports.

It’s a sweet proposition for a student like Inizuza, who no longer has to work to pay for college.

"If you think about it, you're getting paid scholarship money to play video games,” Inizuza said. “How cool is that? How many times have you heard from parents to stop playing video games? And now, I'm getting school paying for it, I have a place I can play, and I don't have to work as much.”

The team’s coach couldn’t find a better player than Inzuza for the Rocket League Division, so he made Inizuza the Rocket League team captain. During tournaments, Inizuza is responsible for developing strategies and shouting orders to his squad.

Five more students arrived this fall to play for the school in a facility built for eSports, bringing the team’s roster to 25.

“Those extra 25 students pay a certain amount, whatever that amount is, that's not scholarship,” said Greg Silvey, director of admissions at Missouri Valley. “Without having an eSports team, we wouldn't have gotten those 25 kids. So, no matter what they pay, we're getting revenue from each one of those 25 students that we did not have before. So that's the revenue-enhancing part for us.”

The school plans to eventually build its roster up to 50 players.

Missouri Valley is joining other smaller private institutions using gaming as a way to attract prospective students amid enrollment downturns. According to EdTech Magazine, shortly after "Good Morning America" aired a segment about the eSports team at Ashland University, the Ohio institution received applications from 500 prospective students.

K-12 schools are also joining the movement. The High School Esports League that was founded in 2017 now has over 1,700 partner schools. 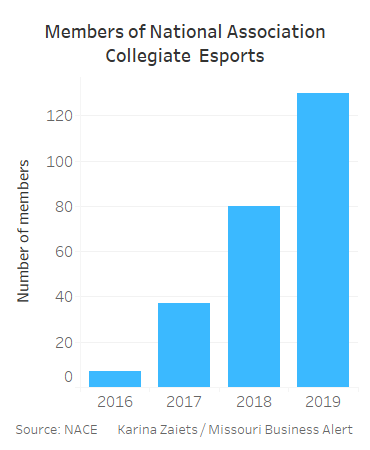 “It's just something new for the university here. I was just excited to be part of it.” — Huber Arana

Huber Arana is the only member of Missouri Valley’s eSports team who wasn’t considered for an eSports scholarship. He was already receiving another scholarship when the eSports coach offered him a spot on the team in the summer of 2018.

Arana plays Overwatch, a team-based shooting game with a myriad of different characters who each have a role to play on offense and defense. The game requires intimate knowledge of the virtual arena, a sharp eye and effective communication among teammates. It’s not so much about beating the enemy but more about who makes fewer mistakes. An Overwatch poster features signatures from members of last year’s Missouri Valley team. The school plans to build its eSports roster up to 50 players. | Zhihan Huang

In the game, Arana is close to attaining the coveted third-diamond rank. According to a post by Overwatch creative director Jeff Kaplan, only 10% of 40 million players have this rank.

Last year, the team participated in a tournament organized by collegiate eSports league Tespa but didn’t get far.

Since its establishment in 2013, Tespa has grown to around 850 schools with nearly 20,000 players and has awarded students more than $3 million in tournament winnings. At Missouri Valley, eSports competitors get to keep any prize money they win.

The 24-year-old Arana, who studies criminal justice, is also a member of the powerlifting team. In 2018, at the USA Powerlifting Collegiate National Championships, he placed 15th out of 25 participants in his category. This year, he plans to go again.

Sitting and staring into the screen wasn’t much of a change for him from pushing the boundaries of the body with more and more weight.

“I would say it is like any other sport besides the physical part,” Arana said, “just because it's a team game. It's a team sport. You learn discipline with your teammates.”

Currently, there are no women on Missouri Valley’s eSports team, which fits with the broader trend. About 90% of students on NACE teams are men Inside HigherEd reports. That’s despite women making up 66% of casual gamers, according to Interpret, a consumer research firm.

$15 million in eSports scholarships and aid

$32,000: The average cost of starting a college eSports program. Raven White believes that within the next decade, all colleges will have eSports teams. | Zhihan Huang

“People message me all the time, ‘Is it real?’ They don't believe that people can play video games in college. I just had a message from a potential student here asking if it's a scam or if it's real. So, it is real.” — Raven White

Raven White spends much more time in Discord, a chat app for gamers, than playing his favorite game, Overwatch. For most of the day, he browses forums on Discord and advertises the eSports team there.

The 24-year-old, who serves as a coach and captain for Missouri Valley’s Overwatch team, is looking for above-average Overwatch players who have a rank of diamond or higher. If an applicant has a lower in-game ranking, however, it helps to have good grades.

White was a senior studying education at the University of Central Missouri when he got an offer from his friend to play for Missouri Valley’s team. He transferred to the school and soon became a coach.

The team practices for 2 1/2 hours a day. It records the training session each Wednesday to watch on a projector for analysis.

“Many colleges have it as a club function,” White said of eSports. “But here, it's an actual sport just like football, baseball, basketball. It's a real sport.”

But unlike traditional sports, students don’t see going to college on a scholarship playing eSports as a path to become a pro, according to White. For someone who wants to cash out from competitions, college tournaments might be the best and only chance.

“I would hope that someone becomes a pro,” White said. “But the likelihood of someone becoming a pro in this game, Overwatch, from North America alone is very, very small. There are more people drafted in the first round of the NFL Draft than there have ever been American players to go pro in this game.”

Even so, more students are getting into eSports. Since 2016, collegiate eSports players have received over $15 million in scholarship aid, according to NACE. Over 3,000 students representing 130 schools currently compete in eSports. The number of national college eSports programs is projected to grow to around 150 by 2020. "Marshall being able to have an eSports team shows that it could be adopted anywhere.” — Ethan Hoffer-Cassianni

To Ethan Hoffer-Cassianni, gaming is much more than a hobby or a collegiate activity.

The 22-year-old, who is majoring in psychology at Missouri Valley, plans to get master's degrees in psychology and software engineering to develop video games that can help treat mental illness. To this end, in 2018, Hoffer-Cassianni transferred from the Indiana Institute of Technology and joined Missouri Valley’s eSports team.

The eSports scholarship offered by Missouri Valley was a big draw for Hoffer-Cassianni. In Indiana, he received a $5,000 scholarship to help pay $40,000 in tuition and housing costs. Missouri Valley offered him $15,000, which covers about half of his cost of attendance.

“This also gave me the opportunity to extend that offer to other people and get people that maybe are not as lucky or have come from really poor backgrounds like me,” Hoffer-Cassianni said.

When Hoffer-Cassianni arrived in Marshall, he was surprised by the small town’s size. Paradoxically, it might be smaller cities and towns that will increase the number of college eSports teams.

Hoffer-Cassianni serves as Missouri Valley’s League of Legends coach. He’s been playing the team-based action strategy game since it was released in 2009. He spent upward of 10 hours a day guarding his base with teammates while trying to lay siege to the opponent’s camp. 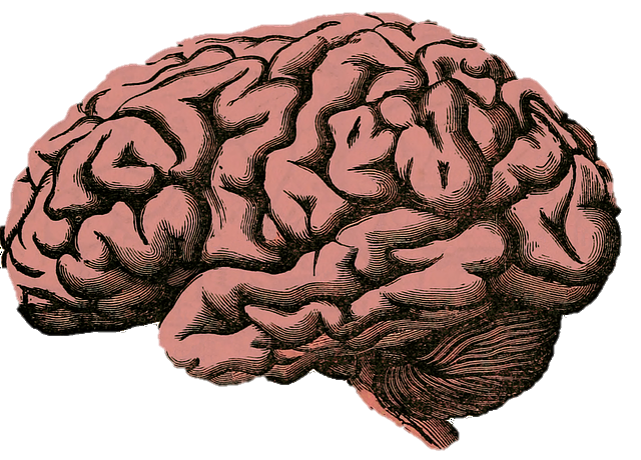 The game enjoys popularity that gives professional sports a run for their money. The 2018 League of Legends World Championship attracted more viewers than the Super Bowl with tickets selling out in less than four hours.

As coach, Hoffer-Cassianni develops strategies for the League of Legends College Championships, or CLOL, where more than 350 teams have competed since this January. The game has a sprawling roster of 140 characters, and each game competition features 10 characters in play.

Hoffer-Cassianni is in the highest division of diamond rank, which is achieved by less than 1% of all 115 million players worldwide. But the achievements of his team get him excited the most.

“When I'm watching my players and they perform something that I've never even seen them do or something that's so far out there, that's just impressive to me. Like, I feel proud because that's their accomplishment,” Hoffer-Cassianni said. “And I'm their coach. And that kind of gets extended into me, where I just see something that I planted and I've been watering and watering and it’s actually starting to grow and sprout.”